This weekend I was invited last-minute to a really awesome day of training with SparkFun, a company of “electronic enablers.” They’re in the middle of a cross-country tour, presenting workshops for teachers, students, and librarians on different do-it-yourself tech activities, with a heavy dose of Maker ideology.

I must admit that up until now I’ve been a little dismissive of libraries’ adoption of the Maker Movement. Maker Spaces must appear somewhere on the How to Be a Cool Library list. There’s a lot of buzz, and people seem eager to tick the “We’re building a maker space!” box.

This weekend made me think differently.

Remember how trendy web 2.0 was a few years ago? People embraced the concept with kind of an acquisitory spirit: often hopping on top of the latest tool without a clear idea that patrons were interested, or that they’d be able to incorporate it successfully into library service. They wanted on the bandwagon! Now that the initial fervor has calmed down though, web 2.0 enthusiasm has produced some wonderful results. Libraries are more participatory, and are joining patrons in their online spaces. We’re engaging more with our communities, both in virtual and physical spaces.

I think library Maker Spaces will end up with the same type of positive results. After the initial craze has died down, we’ll have made some really positive changes to library service. The Maker movement is about being able to create, evaluate, and change technology, instead of passively consuming it. And I don’t think anyone understands better than a public librarian how important tech literacy is. Library evolution is broadening our traditional commitment to literacy: we must include technology. The Maker movement is an important ingredient in getting there. 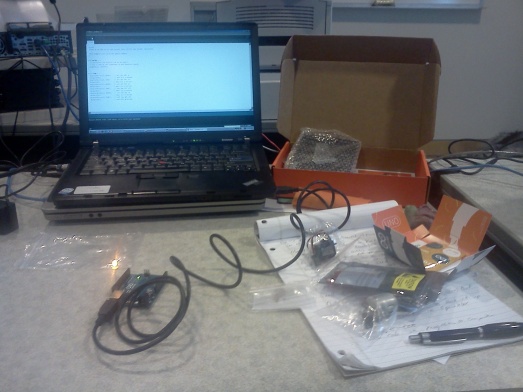 Below are some of my notes from the training, as well as some of my terrible photography:

1. e-Textiles: Sewed a circuit to make an LED light up, with conductive thread. 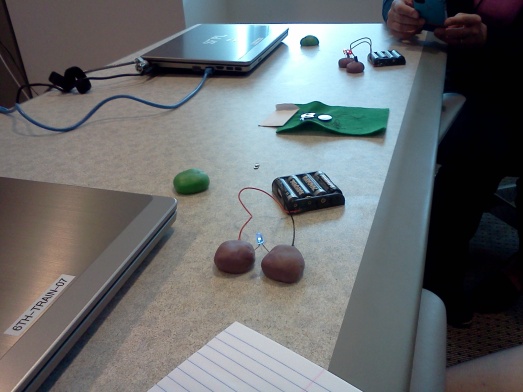 3. Scratch:Easy programming tool. Made a character walk around, spin, etc.

4. Pico Board: Plugged the Pico Board in to the computer to use with Scratch. The Pico Board has different switches and sensors; it has a microphone so you can make something react to sound, a fader, a button, and more. Used in conjunction with Scratch. Could see how you could use the two to make a video game, although I think it would be a long program (or series).

5. E-Origami: Used paper and copper tape to make a circuit switch, which we attached to the Pico board with alligator clips

7. Arduino: Simple computer, with simple programming tool. Made an LED light up. Learned how to change the way it behaved based on changing code,including changing from digital to analog behavior. Never been so elated by seeing a light go on – I did that! 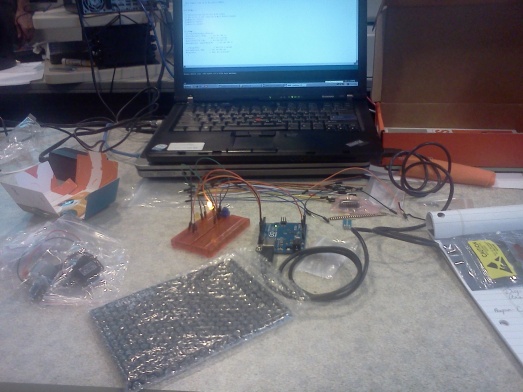 There was one suggestion which they kept reiterating: to do the maker activity as a Pop-Up Program. I thought it was a good suggestion, because many of the things were a lot of fun, innovative, interactive, and portable. I can imagine patrons saying, “you can do this at the library!?”

Also, they had the most awesome service dog:

I’ve been thinking about the different ways that librarians push books.

Personally, I don’t ever want to be told what to read. In this way, my teen years still cling to me: if you tell me I should read a book, I say “YOU CAN’T TELL ME WHAT TO DO!”  For example, it took me ages to crack open The Book Thief, because my sister told me it was a must-read. When I finally got around to it, I loved The Book Thief.  Such a powerful story, and a brilliant look at the way small things are really large things, and vice versa – really, you must read it.

We public librarians recommend books all the time.  We sit at a desk and people ask us killer questions like, “what’s a good book to read?” or “I just finished the new Michael Chabon, what should I read next?” Reader’s Advisory is kind of like match-making. You ask a series of questions, and then use your gut to try to match your reader client with her perfect book-date.

But I didn’t really think about a librarian’s function as a Book Pusher until a couple months ago, when I was working on a weeding project for a children’s librarian.  We were going through the books and getting rid of things which hadn’t been checked out in the last five years, which really is quite a while to sit on the shelf.  She rescued about a dozen books, saying “I don’t think I’ve been pushing these enough.”

Pushing books!  My own knee-jerk reaction against having books pushed at me, even in the most subtle and non-pushing of ways, had really kept me from thinking about what the Action Librarian should do.  An Action Librarian should push books. It’s not enough to create a great collection, you must find ways to entice people into taking them home.

This doesn’t mean you’ve got to run people down and tell them “You’ll love Gone Girl” or “If you don’t read The Passage of Power, baby’s going to be really unhappy.”  But it does mean you can’t just buy a pile of books to sit on.  You gotta lay them out real nice.  You need to create additional content, which showcases your books in their most attractive light.  You need to work your magic in order to really hook people in.  You need to create in a community where, if the reading don’t happen, people’s hands might start to shake a bit.

You gotta push the books.

Library friends, will you help?

I’m starting a blog which will feature short, survey-based interviews with (both anonymous and named) individuals who hire librarians. I am piloting my survey and need guinea pigs! Can you please encourage anyone you know who hires librarians to visit the page below and fill out the survey? I would be happy to answer any questions or concerns, as well as receive any feedback, at the listed email address.

So when I was a kid, a time so long ago it can be measured in multiple decades, I read a book about Harriet Tubman. The only part of the book that has stuck with me all these years is a passage about how because Harriet Tubman never wore shoes, her toes were long and straight. Immediately, Harriet Tubman became my foot role model.  I eschewed shoes (when socially acceptable) in order to cultivate the long toes of a Harriet Tubman.  Nowadays I will sometimes look at my grown-up toes, which have gotten a bit curly and bumpy with age, and feel I have let her memory down. 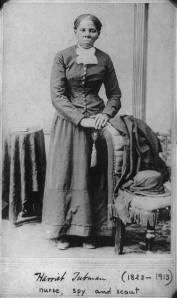 Harriet Tubman photo by H. B. Lindsley via the Library of Congress

I am sure the author did not intend the sort of fixation I developed, so why was this detail included? Was it an attempt to reclaim the hideous and oppressive poverty she grew up in? To say “it was awful to be a slave but at least she had nice feet”? And really, can this even be a historical fact? Is there a journal or oral history which recounts the beautiful toes of the woman who led them north?

You know what’s really amazing about being alive right now? Finally seeking to assuage my curiosity, tonight I Googled “Harriet Tubman Straight Toes.” I was wondering if there really was some sort of significance to this fact, the sort of significance that could be found by idle internet browsing. I did not find any unifying theory. However, my first listed result was in fact the Google preview  of the very passage in the very book I read.  It says:

She was accustomed to the scratchy feel of the tow-linen shirt she wore.  Because she went barefooted, the soles of her feet were calloused, but the toes were straight, never having known the pinch of new shoes or any kind of foot covering.

So I suppose it was really just the effort to use sense details to make Tubman’s experience more accessible for children.  To set the stage for a woman who did truly extraordinarily good things in spite of an extraordinarily deprived and abusive childhood.

This book was  written in 1955!  The copyright was renewed in 1983, just in time for me to enjoy, and the edition digitized on Google Books was printed in 1996.  Generations of children have had the opportunity to learn about the toes of Harriet Tubman.  And now we can reconnect with this resource, via our friends at Google.

What a wonderful world.

I’ve decided to begin collecting a list of library words which sound dirty but aren’t.

From the ODLIS (that’s the Online Dictionary for Library and Information Science, of course):

The idea that two scholarly papers containing a citation in common are bibliographically related in a way that is likely to be of interest to researchers. A similar relationship, called co-citation coupling, is established between two or more documents when they are both cited in a third. Citation indexing is based on the principle of bibliographic coupling. Synonymous with citation coupling

Two or more documents cited in a third!  Steamy!

And the Jamie Lee Curtis of libraries, the

A term coined by Crystal Graham, serials librarian at the University of California, San Diego, in reference to a publication in any medium that has characteristics of both monographs and serials. Most are complete in one part but have the potential to continue. Their defining characteristic is “updatability.” Examples include loose-leaf services, databases, Web sites, and some electronic journals. Beginning in 1995, reconsideration of issues related to seriality resulted in a new model, dividing the bibliographic universe into finite resources and continuing resources, a more accurate reflection of changing patterns in publishing. This new distinction has been adopted in AACR2 2002.

Kind of a dull definition for such a racy term, right?

Help me build my list! Can you think of any more?

Reader’s Annotation: Rhymes and pictures illustrate the similarities and differences represented in the mammal class.

Plot Summary: This book will blow your mind!  Mammals may share some similarities, but there are also a fascinating range of differences.  Animals Born Alive and Well showcases different groups of mammals, illustrating the fascinating variation in existence (and in extinction).

Critical Evaluation: Heller uses clever, rather than twee, rhymes to pull this book along.  The words and pictures really work together to create understanding.  The text has humor, without being too jokey.

Illustrations: The pictures are a detailed enough to be interesting to young minds, but are never busy.  Heller uses naturalistic colors, primarily muted browns.  Her animals have personality without being anthropomorphized.

Reading Level/Interest: 4-8
Curriculum Ties: From the California State Science Content Standards. Kindergarten – Students know: different types of plants and animals inhabit the earth. As a basis for understanding this concept: Students know how to observe and describe similarities and differences in the appearance and behavior of plants and animals (e.g., seed-bearing plants, birds, fish, insects).
Booktalking Ideas: Ask if students know what a mammal is.  Bring in some mammals to show off!

Challenge Issues: There are a few pages of nursing babies, which may create some awkward questions that some parents would rather not answer.

About the Author: Heller graduated from UC Berkeley in 1946 with a degree in Fine Arts.  She published many children’s books and coloring books.  She lived in the San Francisco Bay Area all her life.  More information at http://www.sfgate.com/cgi-bin/article.cgi?f=/c/a/2004/07/03/BAGG77GB7G1.DTL&ao=2